How to check if my computer is overheating.

Particularly during summertime, it’s important that the components within your computer do not exceed certain temperatures. This blog support post applies to both desktop PC’s and laptops.

Modern computers will simply cut out if they exceed their maximum temperatures. They will cut out without any warning.

The BIOS on the motherboard knows what temperature the system is running and will cut dead to protect itself from serious irreparable damage if temperatures hit a certain level (different temperatures on different systems). But running a computer to cut-out level will result in problems.

The general rule is: the cooler a computer runs, the faster it runs.

Overheating can lead to onboard solder connections to become foul, resulting in instability or even preventing the computer ever booting up again.

Chips can fry, capacitors can blow,  the list of malfunctions is endless if the computer is always running near maximum temperature.

The short answer is to keep fans clear of dust build up. But quite often if the system hasn’t been serviced in a while, new thermal heat-sink paste has to be applied to the processor.

Home Tests To Carry Out

On a laptop, if the fan is noisy or sounds like it’s always running in top gear, this may indicate a fault.

If there is hot air coming out of the fan exhaust grid (usually on the side) this points to overheating.

Desktops can be harder to tell with the above tests.

Either way there is a small software utility that I’ll recommend which will give us fairly accurate readings from within the system (PC or laptop) without lifting a screwdriver.

Speedfan is the name of a program that can be downloaded free, giving you temperature readings from within your computer and act as an early warning against critical or fatal damage to your computer.

Here is a video tutorial to help you with running this tool and how to use it. 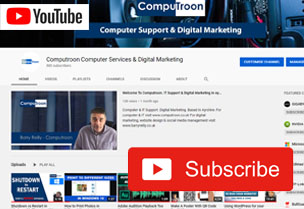